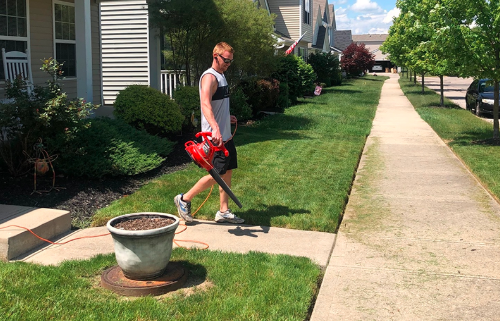 I was driving out of a community a few weeks ago. I had just finished taking a lockbox off of one of my recently sold listings.   I came across a young man mowing his lawn.  Now, that in and of itself is not a big deal, right? Except this particular community charged homeowners, a monthly fee in which lawn mowing is included.  Looking around, it was obvious that the lawns hadn’t been mowed in quite a while. The grass in every direction was sorely in need of a cut – but the neighbors were content to wait for the paid-for lawn mowing to kick in.  Not John Wiser.   I was so impressed that he was mowing and trimming his own lawn that I stopped and asked his name.  To be fair, John said he enjoys lawn mowing.  He said the convenience of having it done for him was not a real selling point to the house.  But, still, none of his neighbors had seen the need to spruce up their lawns rather than waiting for the contracted service to show up.

I call this “pride of ownership”. Most often used in reference to homeownership, pride of ownership is a psychological benefit most often derived from owning a home rather than renting. It is reflected in well-maintained property. It is the knowledge that what I own is a reflection of me.  Right or wrong, most of us practice it every day.  It is making sure the house is clean when friends come over; it is making sure the leaves are raked and the gutters are clean.  It is the sense of satisfaction that comes with knowing that you have taken care of what has been entrusted to you.

Does it pay off?  Absolutely.  Realtors will often point out to their Buyers the small things that tell us a homeowner has likely taken care of the big things. Many times, it doesn’t cost that much.  Pride of ownership is shown in making a small repair before it becomes a big repair. It shows in cleanliness and order and when you’re ready to sell it assures the next homeowner that they can carry on your efforts in a well-maintained home.

The “Good” in Goodwill

Social Capital: What’s in your bank?
Scroll to top